Team-building on the River and Paragliding Over Glenwood

There’s something spectacular about running off of a cliff without plummeting to your doom.

The first time I tried paragliding about two years ago, I couldn’t blink. I think it must have been like the time I got a toy kitchen for Christmas when I was five—complete shock, then awe, then never, ever wanting to walk away from it. Five minutes in the air was simply not enough, and I knew I’d have to do it again. When I found out Glenwood Adventure Company offers booking for Adventure Paragliding, I immediately scratched another trip onto my summer bucket list. Flying seven days a week between 6 a.m. and 10 a.m., with six people per hour (reservations recommended), Adventure Paragliding flies more than any other paragliding company in the States. When the chance came to off the top of Red Mountain, looking over all of Glenwood Springs with a parachute strapped behind me, I recalled those exhilarating moments I’d had when my feet left the ground the first time. The second go-around did not disappoint. 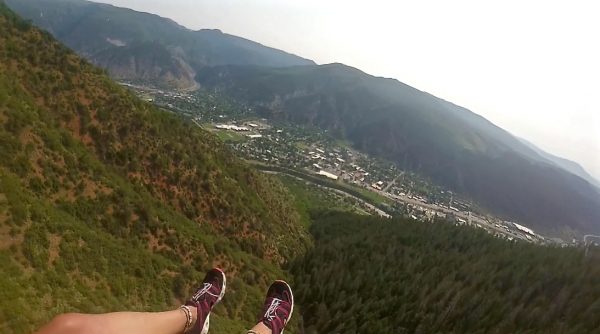 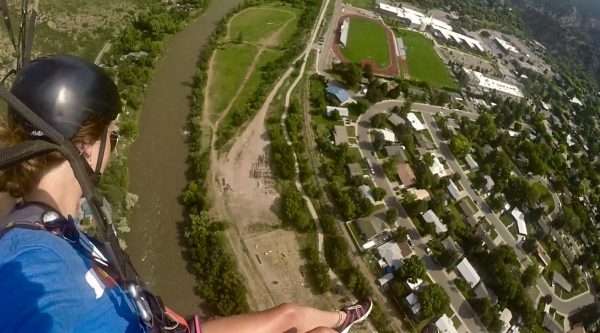 The view of Mount Sopris, the Colorado River and the town of Glenwood was absolutely incredible. It’s amazing how you can give control to the wind and still have it under your control. How you can float over valleys, mountains and rivers without being stuck inside the fabricated confines of an airplane.

In reality, how much closer can you get to the feeling of actually flying?

Not to mention the instructors are super cool and just as excited as we were to go flying. If you’re feeling brave enough, they’ll even do spinning tricks in the air, easily topping the best roller coaster ride you’ve ever been on! 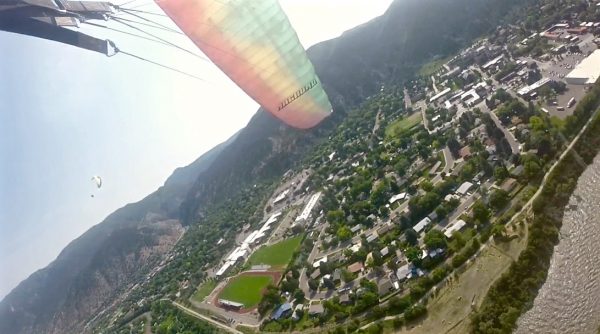 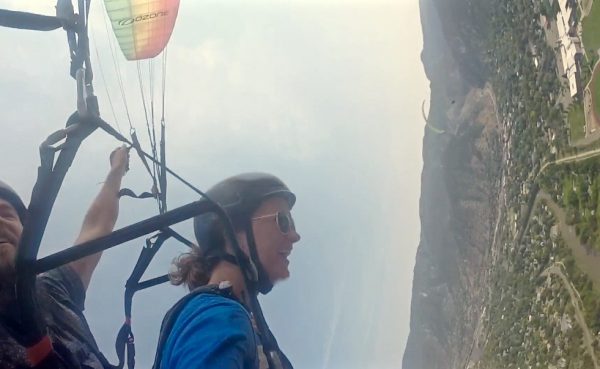 After I landed, I realized I couldn’t scratch off “go paragliding again” from my bucket list, because I’d just have to rewrite it back on. Instead, I decided to replace it with “learn to paraglide.” (Adventure Paragliding offers lessons!)

In other news, last week we hosted a couple of corporate rafting trips, including an overnight lululemon athletica trip and a half-day Muscle Milk trip. Lululemon’s vice president, ambassadors and managers spent two nights and three days drifting through the beautiful and rugged landscape of Ruby-Horsetheif on the Colorado River, passing through red rock canyons and class I-II rapids. With post-lunch group meetings and yoga sessions (when not being driven back by mosquitos), it was a chance to relax and enjoy the outdoors while enhancing team building and bonding.

I was helping to guide the Muscle Milk trip on the Colorado River, but this was no ordinary raft experience. This was a team-building race with 10 boats from the same corporation vying for the fastest time down the 12-mile stretch of river.  My team called themselves “the Quiet Storm” and planned to sneak past other boats as they focused on searching the banks for pool noodles, which counted as time deduction tokens if successfully nabbed. It wasn’t as easy as just paddling like mad to the take-out. In addition to giving the reins of guiding to team members while the actual guide sat back and oversaw safety (and tanned), everyone in the raft had to jump out into a calm eddy and climb back in (with no help from the guide) and then hula hoop 20 times on the shore of a small beach. Our true obstacle? Battling the wind as it drove unrelenting through the canyon walls.

It was nice to see my team’s communication with each other improving when we found ourselves stuck on a rock and one person suddenly floating into an eddy two feet away. There’s a little more to steering than just paddling, and a little more to rafting than just paddling around the rocks. Teamwork, especially in a paddle boat, is absolute key. “We (the guides) are the steering wheel,” I tell my guests, “and you are the engine.”
It takes both parts to make the raft navigate safely, and communication is that bridge between both.

That is one reason why I prefer paddle boats over oar boats—to really get the guests involved and working together. GAC is the only local rafting company to predominantly use paddle boats, with each guest playing a significant part in the course of the trip. Many other companies use oar boats with large, metal frames rigged inside the raft to hold two massive oars; these are also great, though they relinquish most of the control and participation of the guests to the guide.

In paddle boats, we read the water, set up for the current, and become one crew in navigating the river. By the end of the Muscle Milk trip, I believe my team became that one crew, even though we grabbed absolutely no noodles, got stuck on that rock, spun in circles in eddies and came in dead last! But of course it was the fun we had that counted. 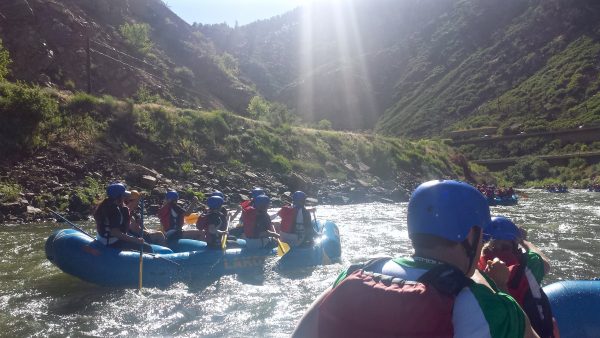 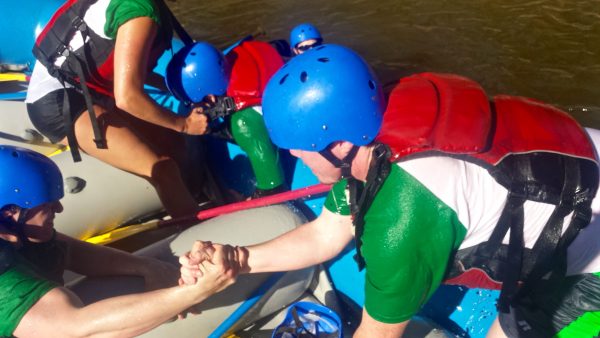 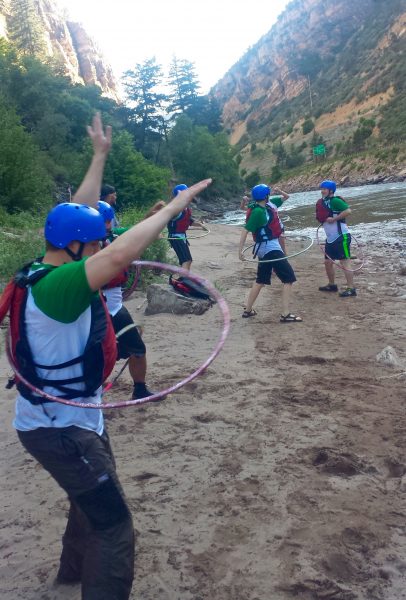 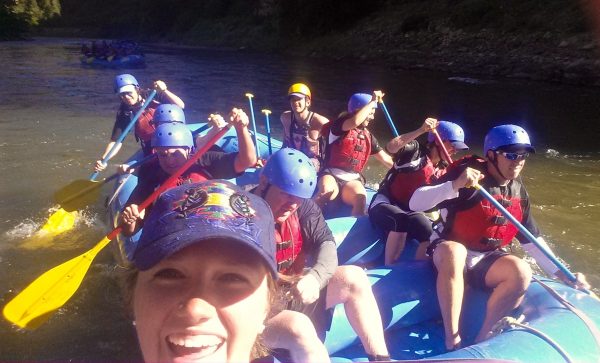 Another awesome aspect of our paddle boats is that many of them are named after Star Wars characters, thanks to one guide putting a Chewbacca decal on the front of one two years ago: 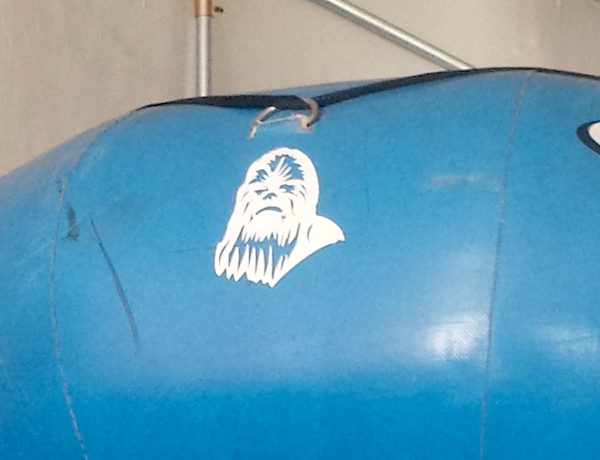 Ken found this to be a brilliant idea and ordered more to be placed on almost every boat we have. 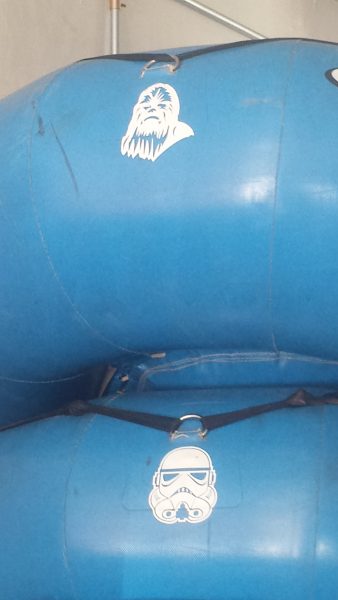 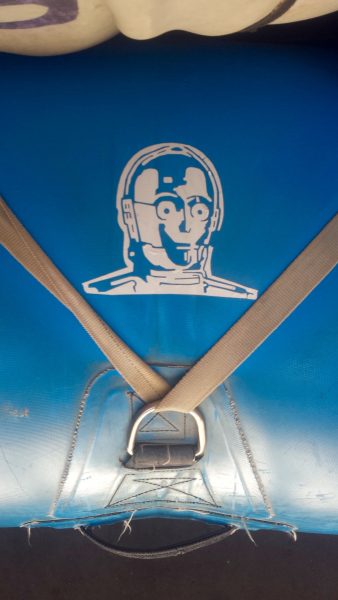 Now we have Princess Leia, Darth Vader, C-3PO, and Han Solo, to name a few. All of the unmarked boats are part of The Force.

In unofficial celebration of our boats, we showed Star Wars: The Force Awakens at our second weekly boathouse movie night last Friday. We’ll keep showing one every Friday at 8:30 p.m. until August 19th. It’s a great way to meet the guides of GAC and the community of Glenwood, so be sure to stop by this Friday if you’re in town (and we’ll do our best not to yell raft commands during the movie, even when appropriate)!